The Applied Research Fund project “Enhancing Kersting’s groundnut production-marketability in Benin (Doyiwé)” published a video presenting the key activities of a Doyiwé seed fair and the achievements of the project. 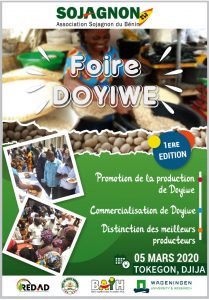 After successful training of seed producers on good agronomic practices for the production of improved Doyiwé seeds, the Project partners organized a Doyiwé seed fair. Goal of the fair was to disseminate the knowledge in the research action for development by presenting the achievements of the project.

Furthermore, the best producers who respected and developed good practices during field schools and who obtained higher yields, were awarded as best Kersting´s groundnut farmers.

Please watch the ten-minute documentary (in French) presenting the key activities of the fair and the achievements of the project.

Kersting’s groundnut – commonly called Doyiwé – is a neglected crop, which is being promoted by the the consortium composed of Researchers from the University of Abomey-Calavi (FSA / UAC) and the University of Wageningen (WUR), the Sustainable Agriculture Development Network (REDAD), and Benin Agribusiness Incubation Hub (BAIH (Sarl). The project is funded by the Netherlands Organisation For Scientific Research (NWO) and coordinated by SOJAGNON.  It aims at improving productivity and marketability of kersting’s groundnut.