Global seed companies are adapting their products to combat the impact of climate change and address nutrition needs. But limited access to quality seed in many emerging economies persists, with the global seed industry reaching just 10% of the world’s smallholder farmers, according to a new study.

The Access to Seeds Index 2019 – Global Seed Companies, published by the Amsterdam-based Access to Seeds Foundation, evaluates the activities of the 13 leading global seed companies to shine a light on where the industry can do more to raise smallholder farmer productivity, improve nutrition and mitigate the effects of climate change through the development and dissemination of quality seed.

The research shows that sales by the 13 global seed companies only reached around 47 million of the world’s 500 million smallholder farmers in 2017, and most investment went to a small number of countries, mostly in South and Southeast Asia. In these regions, global companies invest heavily in local seed business activities: 12 of them in breeding and 12 in production. In contrast, such activites are rare in Western and Central Africa, with only two companies investing in local breeding and one in production.

“Although the industry is making advances in developing more nutritious and climate-resilient varieties, it’s clear that more needs to be done,” said Ido Verhagen, executive director of the Access to Seeds Index. “Material changes won’t be possible without reaching a greater percentage of smallholder farmers, who account for the lion’s share – 80% – of global food production.”

Shaping business models around the needs of smallholder farmers can be profitable, as shown by East-West Seed, a Thailand-based company that tops the index thanks to a strong performance across all areas assessed. It has a unique smallholder-centric approach and a customer base made up almost entirely of smallholders (98%). Switzerland’s Syngenta and Germany’s Bayer are virtually tied in second and third place.

Reaching more smallholder farmers and directing investment to other geographies are critical to tackle rising malnourishment. The number of people suffering from hunger rose from 784 million in 2014 to nearly 821 million in 2017, in part because of a lack of access to nutritious food. However, only six of the 13 global seed companies state that nutritional value is a priority for their breeding programs. Although this is higher than the four companies identified in 2016, when the first Access to Seeds Index was published, progress is slow.

The importance of developing improved varieties of seed, offering better nutritional value and supporting crop diversity is echoed in a recent report by the EAT–Lancet Commission. The global seed industry can do more to address this need for diversification by supplying a larger number of crops and varieties, including legumes and local crops, which are currently neglected.

The index also reveals a sharper focus on climate change. Of the 13 companies evaluated, 12 emphasize that increased yields and higher tolerance to climate and weather risks are essential when breeding. This is reflected in increased breeding for climate-resilient field crops and vegetable varieties since 2016.

By broadening their offering, including the provision of farmer training and other services such as weather-based crop insurance, seed companies have found new ways to help farmers adapt to changing climatic conditions. Eight companies are now integrating sustainability strategies at the corporate level, compared to three in 2016. 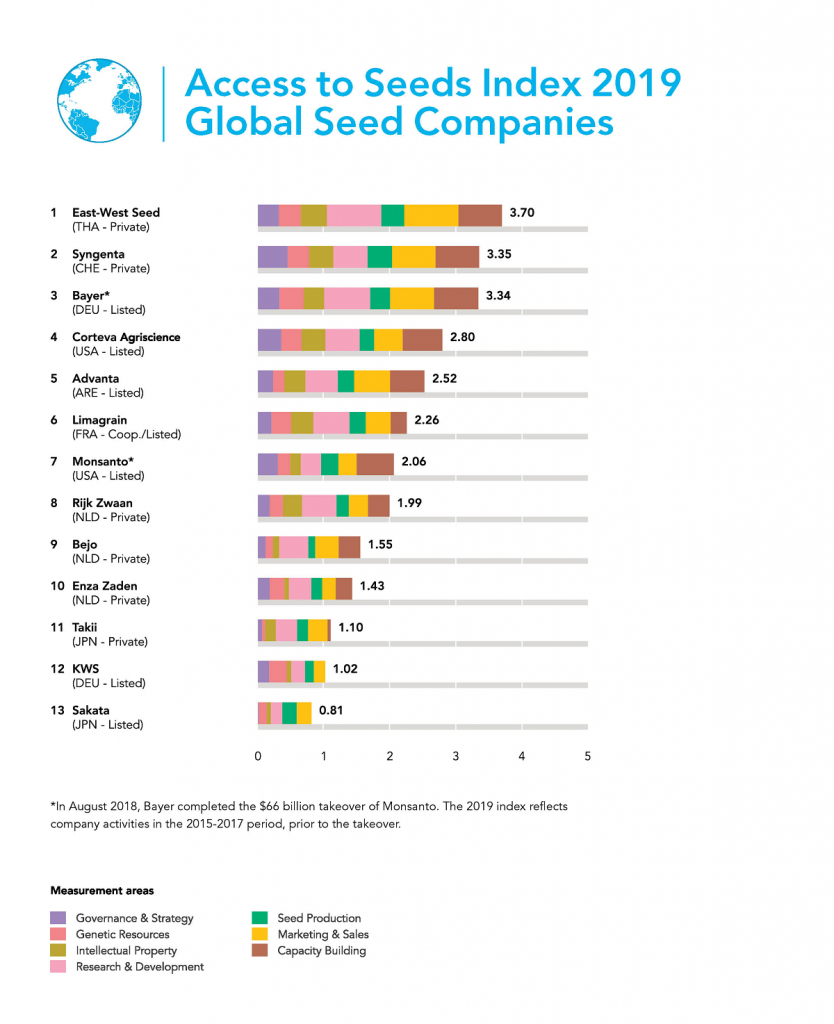 The Access to Seeds Index 2019 – Global Seed Companies is one of the first Sustainable Development Goals (SDGs) benchmarks published by the World Benchmarking Alliance. The alliance was launched in September 2018 during the UN General Assembly in New York. The Access to Seeds Index was established with support from the Bill & Melinda Gates Foundation and the Government of the Netherlands. The global index is complemented by regional indexes that provide in-depth analysis of South and Southeast Asia, Eastern and Southern Africa, and Western and Central Africa. The Access to Seeds Index 2019 – Synthesis Report reflects on the seed industry’s progress and the remaining challenges against a changing global backdrop.

“The private sector is essential for achieving food and nutrition security, one of the major challenges outlined by the SDGs. With the world’s population rising – and hunger with it – amid growing concerns around the environmental impact of crop production, the role of the global seed industry remains crucial if Zero Hunger (SDG 2) is to be achieved by 2030,” said Verhagen.