The Dutch Ministry of Foreign Affairs has presented an online report providing an overview of the results achieved by the Netherlands in the field of development cooperation in 2018. Under the theme Food and Nutrition Security, the Netherlands made an important contribution to the elimination of malnutrition and the development of small-scale food farming.

The online report “Dutch Development Results 2018 in Perspective” describes the results achieved in the 2018 reporting year, which runs from September 2017 to September 2018. The results reflect both the previous policy and the adjustments made by the new Cabinet. Minister Kaag, with the policy document “Investing in Global Prospects” (May 2018), has opted for a stronger focus on four unstable regions: the Sahel, the Horn of Africa, North Africa and the Middle East. Women and young people in these regions need prospects for a better future in terms of work, education and security. The UN’s Sustainable Development Goals (SDGs) form the guideline for the new policy, in which climate action also plays a central role.

The combination of social development and economic growth is at the core of the Netherlands’ development policy. Within this policy, the focus is on themes in which the Netherlands is strong and can make a difference, one of these themes is Food and Nutrition Security.

The Netherlands made an important contribution to the elimination of malnutrition and the development of small-scale food farming. Millions of children received better nutrition and more than a million small-scale farms benefited from improved production methods, new technologies, better access to markets and more sustainable production practices. The Netherlands also contributed to better land tenure rights and the strengthening of the position of women in agriculture. The Dutch contribution to SDG 2 is proceeding on schedule.

The Netherlands’ Food and Nutrition Security policy contributes to the objectives of SDG 2: eliminating malnutrition, doubling the productivity and income of small-scale farmers (both women and men) and making food production systems more sustainable. The problem is urgent, as world hunger has increased again in recent years. The Netherlands has formulated a realistic contribution to SDG 2 and translated it into three long-term goals which should be achieved by 2030:

In addition to activities that target these goals directly, the Netherlands is also working on a better enabling environment for food security. This includes knowledge and capacity, private-sector development, land tenure security, the position of women, and the interplay with other sectors and themes. 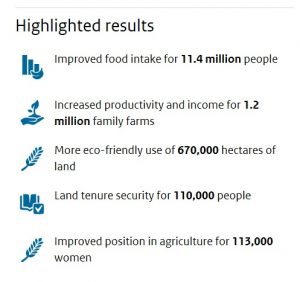 The results show that the efforts deployed to achieve the goals set are generally sufficient. Enough malnourished people and family farms are being reached to achieve the goals set by the Netherlands in 2030. Only the amount of agricultural land converted to sustainable use remains too low. There are also demonstrably positive effects in fields such as improved nutrient intake, productivity, market access, management of natural resources and resilience to shocks. In many cases, the sustainability of these effects in the long term cannot be determined yet. Aim is to get a better picture in the future, in order to show the Dutch contribution to the global objectives for 2030 (eliminating malnutrition, doubling the productivity and income of family farms, and conversion of land to more sustainable use). Further methodology development is required to measure these long-term effects.

The report also highlights three factors contributing to a better enabling environment for food security: establishing land tenure security, a strong position for women and improved knowledge and innovation. The results indicate that substantial contributions have also been made in these fields.

The report shows the progress of Dutch efforts towards the objectives of SDG2 regarding both short-term effects and long-term outcomes. There are two important things to note in this regard:

Glimpse into the future

In the context of realizing the Netherlands’ intended contribution to the SDG 2 targets within the current financial period and enacting a shift to new focus regions (Sahel, Horn of Africa, Middle East and North Africa), two things are worth mentioning: