Fifth IYS2015 article in a series

To contribute to the objectives of the IYS 2015, the F&BKP commissioned ImpactReporters to publish seven background articles on themes related to international soil and land use and enhancing food security. The fifth article ‘Precision fertilizing using drones and scanners‘ has been written in Dutch by Marianne Heselmans of ImpactReporters and was published on the Kennislink website on September 18, 2015. Please find below a translation of the article in English.

The first drones are already flying over potato, wheat and soya crops. By combining drone-recorded imaging with soil scans, growers are able to target their fertilizing much more precisely than before. This method has great environmental advantages as some plots of soil require far less fertilizer than others. Soil sensing and mapping systems are also being developed for use in Africa.

Drone eBee made its first flight over Dutch grower Derk Gesink’s potato fields in early June. It was a bit tense, the farmer admits. But all went well and within a week he received the pictures. ‘We were able to see where in the field plants had a lot of leaves and where they didn’t’,  says Gesink over coffee in his kitchen in Mensingeweer, in the northernmost Dutch province of Groningen.

Soil analysis subsequently showed that those parts of the field with little greenery were made up of heavier clay soil containing relatively high levels of nitrogen. Until this summer Gesink used to fertilize his land evenly, spreading some 200 kilograms of artificial fertilizer per hectare. This July, however, he inserted a special card in  his tractor cabin’s computer, so that his muck spreader gave the heavier, nitrogen-rich areas of the field only half of what he would previously have used. A hefty saving. 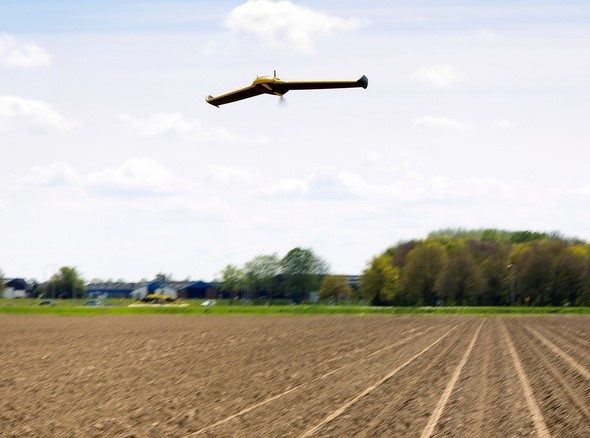 The eBee drone in action during tests in February. Photo: Derk Gesink

Gesink is one of a new breed of arable farmers leading the way worldwide in ‘precision agriculture’. These pioneers no longer treat their fields evenly, but attempt to give their crops exactly as much fertilizer, pesticides, lime or water as is needed at any particular time or in any particular spot. That benefits the crop and it’s good for the environment. It results in fewer pesticides being used and serves to cut surpluses of nitrogen and phosphates that are contributing to reduced biodiversity in many countries.

These ‘arable farmers 2.0’, as some of them call themselves, work with hundreds of indicators. Indicators pertaining to the crop, to the soil and sometimes even related to insects or the weather. Farmers with a field of just two hectares will often still know the areas in which the soil is denser or has a higher nitrogen content, for example if they were previously used to keep horses or because there was formerly a ditch. But when it comes to fields stretching out over eighty hectares (like the land farmed by Gesink) or even several thousand hectares (as with some soya farms in Latin America), then variable spreading requires advanced imaging techniques, measurements and algorithms. 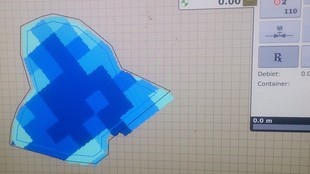 This map was used to direct potato grower Derk Gesink’s spreader in July: the light blue parts of the field were given less artificial fertilizer than the dark blue sections. Photo: Derk Gesink

Keeping to the straight and narrow

One of the first steps was to start using GPS. Gesink started using GPS ten years ago to ensure his computer-controlled tractor would drive in a straight line across his fields. ‘That alone means you’re already using less fertilizer and pesticide because there’s no overlap on the field,’ he says. Around nine out of ten Dutch arable farmers now use GPS. Across the world a few hundred farmers are using drones, including wheat growers in Ukraine, olive growers in Cyprus and soya farmers in Argentina. European market leader is the Swiss company SenseFly, founded in 2009. This company also supplied the polystyrene eBee that photographed Gesink’s fields.

Derk Gesink is also one of the first growers to use soil mapping techniques to ascertain the soil composition of different areas of land. Together with a couple of other potato growers he has been using a soil sensing and mapping system built by Kansas-based market leader Veris Technologies. ‘Farmers already commission soil analyses’, says agricultural expert Aaldrik Venhuizen of the Agrifirm Plant cooperative, which has been helping Gesink and his Groningen colleagues. ‘But the difference is that they do that per five or ten hectares, while a scanner like this is able to show soil variations every ten square metres. That’s a major step forward.’

The soil sensing and mapping system, which is hooked up to the back of the tractor, takes soil samples at two different depths every ten metres. The scanner automatically determines the variations in the soil and registers characteristics such as acidity and organic matter content.

With the data garnered using all these new measuring techniques, farmers and consultants compile ‘task maps’  to adjust machinery settings for precision spreading. Agrifirm has developed maps for location-specific liming, amongst others. Too much acidity in the soil will adversely affect its structure and root systems: clay develops into thick, impenetrable plates. Using soil maps to calculate how much lime a particular section of the field requires, increases the likelihood of the soil having the right degree of acidity to allow the crop to flourish. ‘Interest in soil mapping is growing’, says Venhuizen. ‘Last season two hundred growers took part. Not only potato growers but bulb farmers and lily growers too.’

Three maps of a Dutch potato field, made on the basis of soil analysis. Left: depiction of the variation in organic matter content; centre: variations in acidity levels; right: the ‘task map’ indicating were and how much lime the farmer needs to spread in order to maintain acidity levels. The resolution is ten by ten metres. Photo: Agrifirm

Two hundred Dutch growers who use soil mapping techniques is not that many. But America’s Veris Technologies currently ships soil sensing and mapping systems to some forty countries, including China, South Africa and Russia. The technology could be set to take off, says Venhuizen. ‘Ten years ago arable farmers were saying “I can drive straight myself”. But these days new tractors come with GPs built in. Just compare it with how quickly satellite navigation systems became an established technology in cars.’

Over the past five years major agrochemical concerns have also entered the precision agriculture sector. In 2014, for example, Monsanto acquired Climate Corporation for a billion dollars. The company develops technologies for processing historic weather, soil and crop growth data. According to British newspaper The Guardian, its free app with up-to-date information per individual plot is now used on 7% of America’s arable land.

And organic farmers are investing too. Aimed specifically at helping them, Wageningen UR’s brand-new drone Ocky took pictures over the organic test fields in Wageningen. The images will be used for precision composting of the crop and to sow drier areas with drought-resistant plant species, among other things. 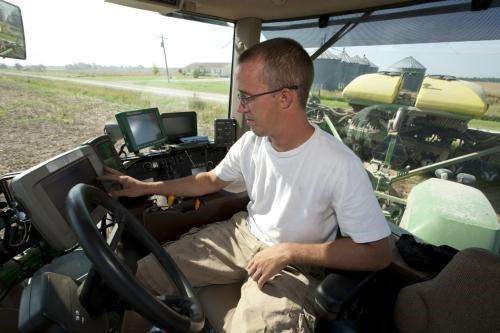 The cabin of a contemporary soybean grower contains a great deal more in the way of  ICT functionalities than twenty years ago. That’s why Monsanto, a supplier of seeds and crop protection aids, expanded into sensors and software

There’s one factor still slowing things down, however. While soil variations can now be mapped per ten square metres, the spreader settings often can’t go under 25 by 25 metres. And sprayers usually cover an even broader area.

But on Dutch strawberry farms the pioneers are already using more precise machinery that can dose each strawberry bed or row separately. Within thirty years we’ll probably see the first robots at work in the fields. Quite likely they’ll be a variation on the carriage that southern European researchers are currently developing for winegrowers as part of the EU VineRobot project. According to the website, this wine robot first analyses the condition of the soil and that of the individual plant before administering the correct dosage of fertilizer and water needed by the plant in question. You can’t get more precise than that!

This film shows how three researchers involved in the EU ‘Vinerobot’ project send their map-and-fertilize robot on automatic pilot through a vineyard. There are a few mishaps…

Soil sensing and mapping systems, computer crop growth models, drones: it all sounds much too expensive for the millions of small maize fields in Africa measuring no more than a scant 1.5 hectares apiece. Even so, instruments are also being developed for use there. One such farming aid are the detailed soil composition maps of Africa that can be explored via Google Earth, which were launched this summer by the Wageningen-based World Soil Institute ISRIC and its partners. Via Google Earth users can zoom in on a country, region or village, thereby calling up charts displaying twenty soil characteristics, such as the likely nitrogen and phosphate levels and organic matter content. The charts make predictions at six different depths, per plot of 250 square metres. For a demonstration of the African soil chart, click here.

The freely accessible atlas is primarily intended for crop growth and climate modelling. But it will also be incorporated into an app for farmers which the Nairobi-based Africa Soil Information Service is currently building. The app, which will also incorporate weather and climate data, will help farmers and agricultural advisors with questions like: how much phosphate is needed for this field? Or: how big a maize yield can I expect in this region?

The Swedish Agricultural University SLU and the international CIAT institute are also currently developing an app for African villages. Maize farmers uploading colour photographs of their soil will subsequently be advised on how to work their land. 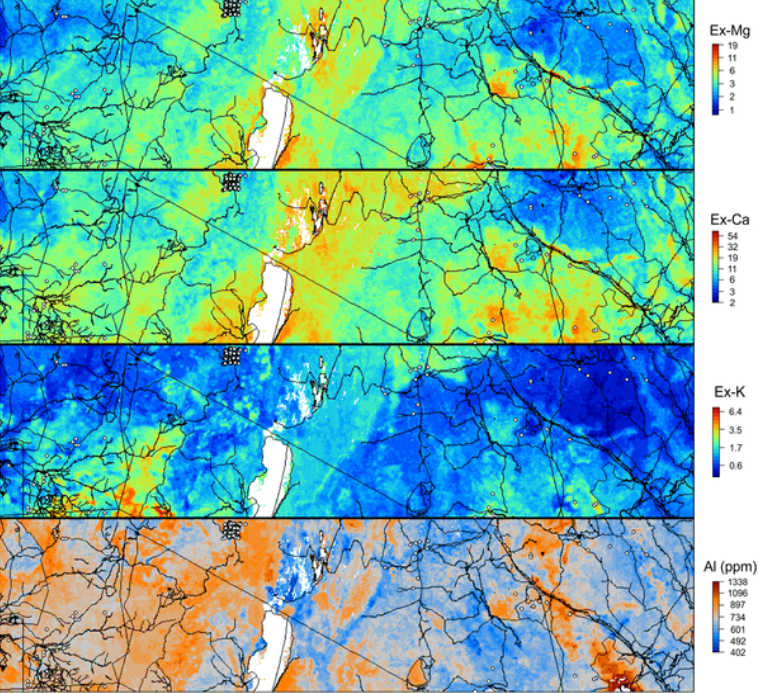 Map of a part of Africa showing four different soil characteristics (magnesium, calcium, potassium and aluminium). Using these maps one can calculate, among other things, what quantities of which nutrients are probably required for different plots of land.  Photo: ISRIC