Home / Too much fertilizer, too many brambles

Too much fertilizer, too many brambles

Third IYS2015 article in a series

To contribute to the objectives of the IYS 2015, the F&BKP commissioned ImpactReporters to publish seven background articles on themes related to international soil and land use and enhancing food security. The third article ‘ Too much fertilizer, too many brambles‘ has been written in Dutch by Marianne Heselmans of ImpactReporters and was published on the Kennislink website on July 1, 2015. Please find below a translation of the article in English.

Too much fertilizer, too many brambles

Brambles, nettles, clogged ponds and degraded corals. Excessive levels of nitrogen in the soil due to artificial fertilizers are degrading natural habitats all over the world. Using less artificial fertilizer and eating less meat will help alleviate the problem – although the effects won’t be seen any time soon.

Ow, scratches and stings. Taking that narrow track in your ramble through an area of natural beauty means you’ve ended up being scratched and stung as you brushed past brambles and stinging nettles.

Brambles and nettles – they seem to be taking over in western Europe. Like grass, elder and hogweed they’re fast-growing species. And these fast growers are flourishing at the expense of many other species due to excessive nitrogen levels in the soil. Nitrogen pollution is a global problem – along the Polish coast, around Beijing and in the Gulf of Mexico. Fast-growing algae regularly clog the excessively nutritious surface water, choking off almost all other life forms.

Last month the World Wide Fund for Nature (WWF) turned its attention to the nitrogen problem in a popular science paper entitled Nitrogen. Too much of a vital resource. ‘Nitrogen fertilizer has significantly boosted agricultural production’, the brochure concludes. ‘But at the same time artificial nitrogen fertilizer has become one of the principal causes of biodiversity loss, air pollution and eutrophication of freshwater lakes and coastal waters.’

The paper refers to dozens of studies into ‘reactive nitrogen’, the nitrogen bonded within nitrates, ammonia and nitrogen oxides (including nitrous oxide or laughing gas) that is found across the world. The studies have unveiled new data, such as the findings of a group of international researchers publishing in a special nitrogen issue of Philosophical transactions  in 2013. They calculated that in 2000 the amount of reactive nitrogen being added to the global environment was more than twice that of a century earlier.

Estimated at around 145 megatons in 1900, nitrogen production a century ago consisted mainly of naturally occurring reactive nitrogen, principally originating from nitrogen-fixing bacteria. Such bacteria in the soil convert the non-reactive atmospheric nitrogen (N2)  into fixed compounds, such as nitrates. Plants subsequently absorb these nitrates as nutrients.

In 2000, when nitrogen production amounted to an estimated 345 megatons, at least that much reactive nitrogen came from artificial nitrogen fertilizers alone. In 2050 production is set to climb to between 408 and 510 megatons, as the world’s growing population consumes and fertilizes more.

‘It’s quite simple’, says Jan Willem Erisman, whose Professorship of Integrated Nitrogen Studies at Amsterdam’s Free University is funded by WWF. ‘Worldwide, around 128 megatons of artificial fertilizer is sold annually. Of that, around 40% disappears into the atmosphere as non-reactive nitrogen. But that means a build-up of 60% annually in reactive form.’ 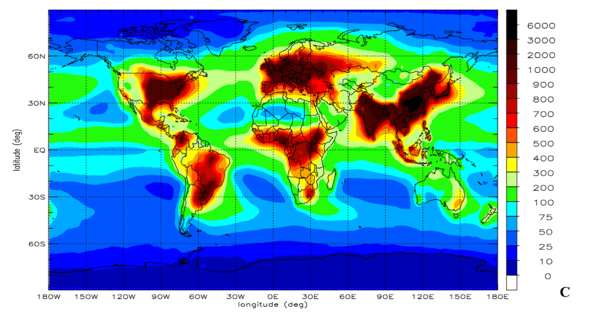 Wim de Vries, professor of Integrated Nitrogen Effect Modelling at Wageningen University, displays a series of charts – they come from the book Critical loads and dynamic risk assessments, that is published in May 2015. One of the charts shows how much reactive nitrogen goes onto the fields in a year. ‘In the US and western Europe it’s more than 150 kilograms per hectare per year, in China it can be over 500 kg. Plants can never take up that much in the way of nutrients.’ The nitrogen residues result in soil acidification and reduced biodiversity, they run off into surface water causing eutrophication and end up in the air as nitrogen oxides (such as N2O3).  These atmospheric gases lead to poor air quality and cause nitrogen deposits in surrounding nature areas.

De Vries also points to figures that reveal just how sensitive nature areas are. The data are included in a book published by Springer in May on critical nitrogen loads. For example, the variety of plant species in the tundra starts to decline at a load of just 3 kilograms of nitrogen per hectare a year; while in tropical and subtropical forests biodiversity is adversely affected from 5 to 10 kilograms per hectare and that of mountain alms from 10 to 20 kilograms. On average, nature areas start to lose biodiversity at loads upwards of 10 to 15 kilograms per hectare a year. In the Netherlands, the nitrogen load in many areas amounts to well over 30 kilograms a year; in China that can be as much as 60 (see chart).

Less clogging in the Netherlands

The 1991 European ‘Nitrate directive’ has booked a degree of success in reducing nitrogen loads. In 1985 the Netherlands still numbered quite a few pastures and arable fields where farmers spread upwards of 500 to as much as 1000 kilograms of nitrogen in the form of artificial fertilizer and manure from intensive livestock farming. Nowadays the loads may not exceed 170 to 300 kilograms a year, depending on the type of soil and manure.  ‘That’s still too much for the surrounding nature areas’, says Jan Willem Erisman. ‘But at least the nitrogen loads in our rivers have been reduced by 40%, which means there is far less clogging as a result of algal blooms.’ 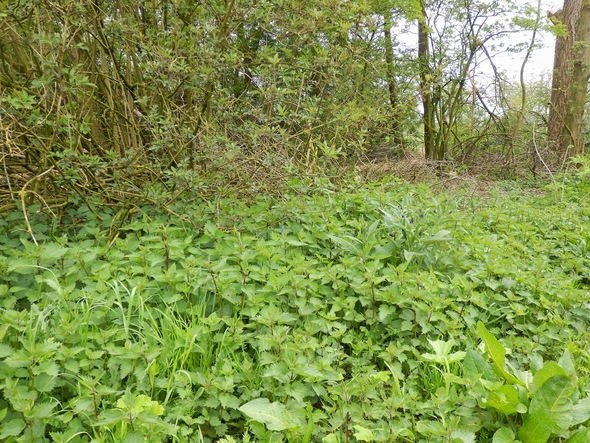 That contrasts with regions such as China and South-East Asia where no such restrictions yet exist. ‘We have three PhD research students investing soil acidification in China,’ says De Vries. ‘Because they don’t use lime on their fields, as we do, the soil has become so acidic that even the crops have started to suffer.’ Chinese agriculture experts now have to convince three hundred million farmers they need to use less artificial fertilizer rather than more. 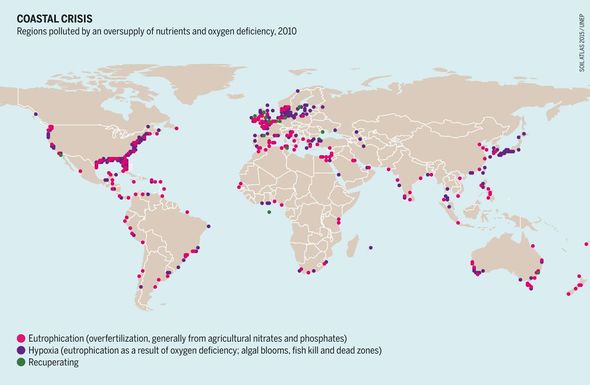 This chart shows the coastal areas suffering from eutrophication due to excessive nitrates, phosphates and/or lack of oxygen. The green dots indicate where areas are in recovery as a result of limits being imposed on the use of fertilizers. Source: GlobalSoilAtlas.

Erisman, who is also director of the Louis Bolk Institute for research into sustainable farming, is a proponent of agro-ecological farming. This involves sustaining fertility through the use of locally derived animal dung and compost, and nitrogen-fixing plants such as lupines, beans and clover.  Farmers use artificial fertilizer only when there is no alternative; considering the resultant productivity loss of 10 to 20 percent a fair price to pay for reduced pollution.

Elsewhere, such as in southern Africa and Ukraine, the soil is nitrogen-poor, which hampers crop growth. Artificial fertilizer, compost and animal manure are difficult to source, or too expensive. Erisman: ‘We should be keeping less livestock in the Netherlands and more in regions like those. That would also help redress the balance of nitrogen flows.’

How to reduce your nitrogen footprint

Eating less meat, fewer eggs and cutting down on dairy: you can figure out how to live a low-nitrogen lifestyle using the international N-footprint calculator. Simply answer a few questions – like how many eggs you eat a week – and out comes your own personal nitrogen footprint.

According to the calculator, compiled by two US universities and the Dutch energy research agency ECN, the average Dutch lifestyle results in an additional 24 kilograms of reactive nitrogen being produced a year. Of those 24 kilograms, 21 are related to food, while the remainder is generated by the way we live, transport and goods such as clothes and gadgets. So what is to be done? It turns out that if I replace all the meat, eggs and dairy products I consume with protein-rich vegetarian alternatives such as beans and pulses, the load is reduced to 16 kilograms. Cutting out my 50 cups of tea and coffee a week in favour of drinking plain water reduces it further to 15 kilograms. Getting rid of the car: to 14 kilograms. An added bonus of these lifestyle changes is that I’d be helping reduce water consumption and carbon dioxide emissions.