Researchers from OSMARE1 – a GCP-4 research partnership funded by NWO and implemented by a global consortium from 2018-2020 – are studying the factors that detract from or contribute to resilient business models of smallholder farmers in East and Southern Africa. During a visit to a dairy farm, milk bulking group (MBG) and processing plant in Malawi in 2018, Francis Jiva and Rob Lubberink were introduced to some of the challenges in dairy production, from farm to fridge, and set out to better understand the context in which OSMARE research will take place over the next 3 years.

OSMARE draws on the agribusiness models supported by Vuna – a 3-year Climate Smart Agriculture (CSA) programme, funded by UK-Aid and implemented by Adam Smith International in 5 countries in East and Southern Africa.

Vuna piloted a CSA-dairy project, working in 10 districts in Malawi, which sought to support dairy farming by addressing impacts of Climate Change. The Vuna project trained farmers on CSA practices and techniques and introduced technologies that address the issues of adaptation to and mitigation of climate change impacts, while addressing the dairy farmer’s business. OSMARE also considers if this intervention has strengthened the business of dairy farmers. 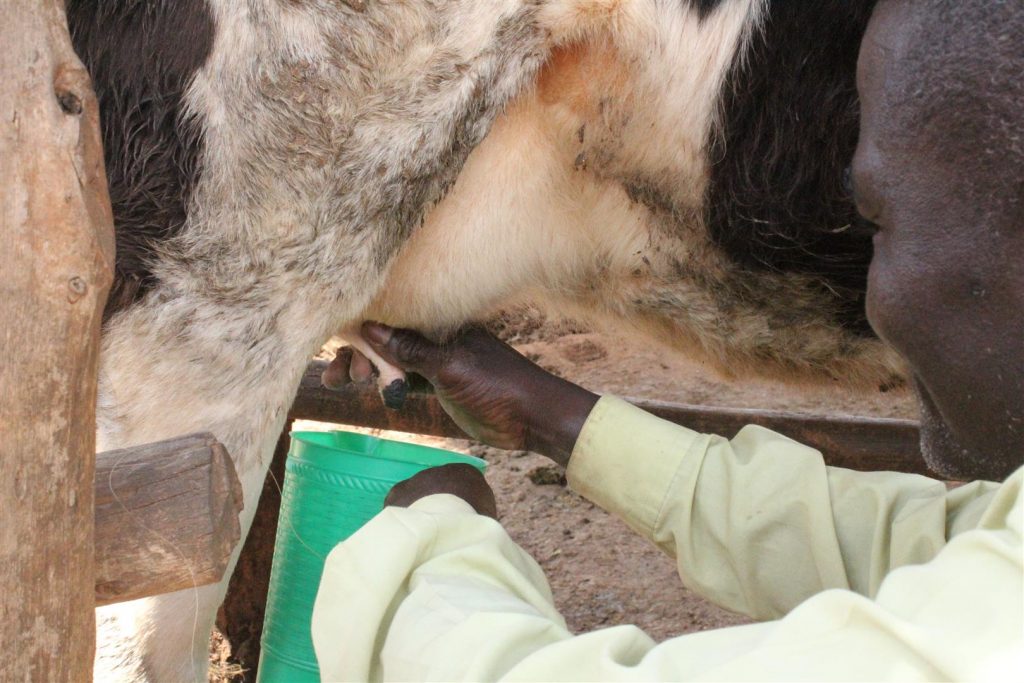 A smallholder dairy farmer part of the CSA Dairy project ran by Vuna in 2017-2018 milks his cow in the afternoon and prepares to take the milk to the milk bulking group.

Challenges for the dairy farmer

OSMARE met with Sarah2, a dairy farmer in Linthipe, one hour’s drive south of Lilongwe, Malawi. As a smallholder, she has 2 dairy cows that produce on average between 10-20 litres per cow per day and she grows legume seed – a typical combination of farming value chains in the region. But, as is the case with several other smallholder farmers, she faces challenges: maximising profit while maintaining milk quality, continuing milk sales through formal markets not informal side-selling, managing a household and adapting to the changing climate as she requires good quality feed for her cows.

As a dairy farmer selling to the formal market, her first challenge is hygiene and passing the MBG’s test for additives, adulteration and bacteria particles per millilitre. She explains that when selling to the formal market (the MBG), tests are performed on the milk at the bulking station. If she gets a positive result on all the tests, the milk is accepted, and she would receive payment. Additionally, she is able to receive a premium for the milk if it reaches a high quality. However, if the result indicates adulteration (i.e. a high quantity of water) or additives (i.e. baking soda) or if she fails the alcohol test (i.e. as a result of microbes in the milking container), the milk is rejected.

Sarah milks in the morning and evening and she normally combines the milk from the previous evening with the fresh morning milk. While it may affect the quality, she has little choice:

For Sarah, having introduced simple practices of washing hands, cleaning the cow’s udder, being aware of the cleanliness of the cow’s environment and using sanitised buckets or jugs, were key to hedge against some of the risk-factors compromising milk quality. The simple act of washing hands could be the difference between profit and loss.

But this might not always be the case. Hygiene seems to be a bigger factor when selling to the MBG, than it is when selling at the local market. Based on anecdotal evidence, when a buyer is in need of milk and has little money, they will buy directly from the nearest dairy farmer, in quantities they can afford and in containers they have available. 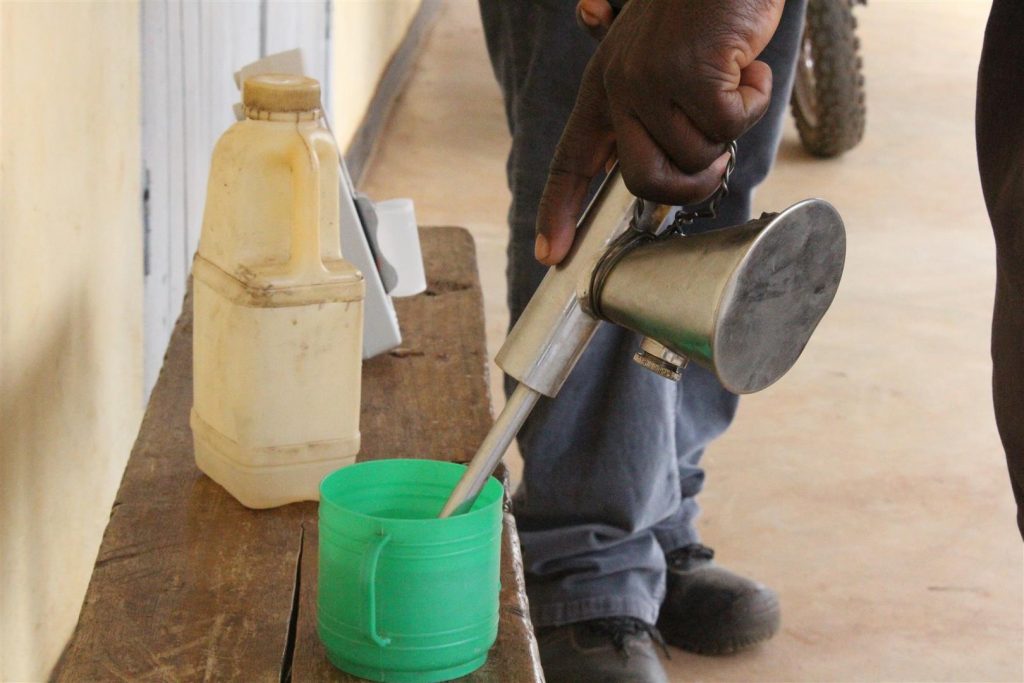 An employee at the Milk Bulking Group administers an alcohol test: milk brought by the farmer is drawn from the container into the silver filter, mixed with alcohol and poured on a petri dish.

Despite the attractiveness of side-selling and the earlier availability of money, smallholder farmers are required to sell a larger percentage of their milk to the formal market and are discouraged from bulk selling at the informal market. It is yet to be determined how this regulation is enforced. At a dairy farmers meeting, OSMARE engaged other farmers who explained that a litre of milk can fetch up to 400 Kwacha at the informal market, while selling to the MBG may be significantly less than that. If milk quality, hygiene and formal market sales are to be encouraged, there is more that needs to be done to incentivise smallholder farmers to sell to the MBGs.

During the visit, the researchers also met with milk producers associations; farming groups where smallholder farmers can raise their concerns and grievances, and address issues such as compliance with dairy regulations. It is also the collective that serves as information centres, deal with outbreaks (i.e. dry-spell or insects) and encouragement among smallholders.

The milk producers’ associations are aware of the issues dairy farmers face. They work with them as mediators on milk quality and price and liaise with the government sector and the department of livestock on policy issues. In addition to the business concerns of the dairy farmers, the associations know of the importance of climate-related challenges for farmers like Sarah.

They focus on improving feed, water resources and responding to heat stress that are all issues related to climate smart agriculture. In the project piloted by Vuna, one of the associations – Malawi Milk Producers Association (MMPA) – implemented hydroponic fodder growth. Although hydroponics is not a novel invention, it was a new alternative to introduce high quality and nutritious fodder at times when foraging was not possible and to augment the existing feed for dairy cows. This could mean that a low-cost structure (approximately 21000 Kwacha when made locally) could provide consistent fodder to improve the quality of milk for dairy cows. It could also be a business model, an opportunity to make money by selling hydroponically grown fodder to farmers (in other words, some community members specialising). This can be an important activity and contribute to sustainable feed production as the dairy cows on the smallholder’s farm are not grazing.

In discussion with the farmers, regular and consistent availability of feed is not the only “sustainability” concern – they indicate that knowledge and training for farmers, as often offered by donor-funded programmes, do not always reach all farmers in the region and that uptake is slow. The farmers are familiar with other research and intervention organisations who have provided much needed training to ‘lead-farmers’ (the exemplary early adopters / innovators who act as champions in their regions). The trainings are offered to the farmers, but the message does not get shared easily across the rest of the farmers. Of course, the challenge for donor funded programmes is that their lifespan is limited and so too their reach. OSMARE’s research will look at the impact of such lead farmers on the resilience of the business model.

Sustainability is also impacted on by succession – or rather, the lack thereof. Dairy farmers indicate that while they would like to welcome youth into farming, youth often do not have the capital to engage in dairy farming. Succession can generate problems if you do not choose the right child to take over the cows and sharing 1 or 2 cows between 4 children is problematic.

Challenges like Sarah’s, are not unique, but offer a good view of the dynamics of smallholder dairy farmers and help to set the context for the research. OSMARE, focusing on the organisational structures that contribute to resilience of the smallholder business model, will consider these challenges, but also the innovative solutions developed by smallholders.

Follow OSMARE on LinkedIn as we learn about this and other resilient smallholder business models.