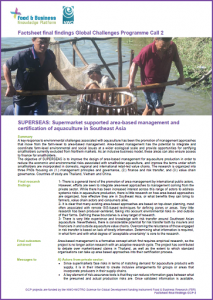 GCP research is carried out in consortia consisting of Southern and Northern scientific and other partners. The projects have a duration of four to five years and are aimed at enhancing the understanding of food and nutrition security in Low- and Middle-Income Countries. In April 2015, six Integrated Projects have been awarded funding as part of the GCP second Call, with focus on inclusive business and regional trade. The projects will be finished in the course of 2020.

This GCP project has contributed to debate over market-based claims in Thailand, as well as the extent to which standard organisations can take up area based approaches into their certification process.