In the context of the Applied Research Fund project “Rainwater harvesting from Roads For Indigenous Pasture production and improved rural livelihoods in semi-arid Kitui, Kenya (ROFIP)” this Postcard introduces Jeremiah Ngaya – a pioneer in indigenous pasture production who is busy teaching other farmers how to venture into pasture farming.

Climate variability and change comes with its bowl of impacts, especially to those farmers who rely entirely on rainfall to grow their crops. Farmers in arid to semi-arid lands (ASAL) are often ‘agropastoralist’: combining crops with extensive livestock keeping. In the last 5 decades crops have received more attention, though in the last 10 years it has become more and more difficult to harvest a good crop. The now often very scant and ill-timed rainfall leaves crops half-way maturity. And farmers end up with nothing. Even worse, they lose what they invested.

At the same time, in Makueni County, Kenya and other arid to semi-arid lands (ASALs), livestock is a major asset. Every farmer will have a number of cows, goats, sheep, donkey and chicken. Cows and goats being the main livestock units. In the past it was common to let your livestock roam freely, for there was enough pasture and fodder available. However, due to a combination of factors pressure on grazing lands has increased, while the availability of pasture and fodder has reduced.

Now, what is one to do if you have livestock, but cannot find enough to feed? Right, you have to grow your own feed!

Meet Jeremiah Ngaya: a pioneer in indigenous pasture production. This is a relatively new agricultural activity among farmers in Makueni County and surroundings. He has chosen to grow grasses on his land of 76 acres. Indigenous grasses, because this haven proven their mettle: they are drought resistant and can establish well with low and uneven rainfall. The grasses he grows are Maasai love grass (Eragrostis superba/Mbeetwa), African foxtail grass (Cenchrus ciliaris/Ndata Kivumbu) and Horsetail grass (Chloris roxburghiana/Kilili). 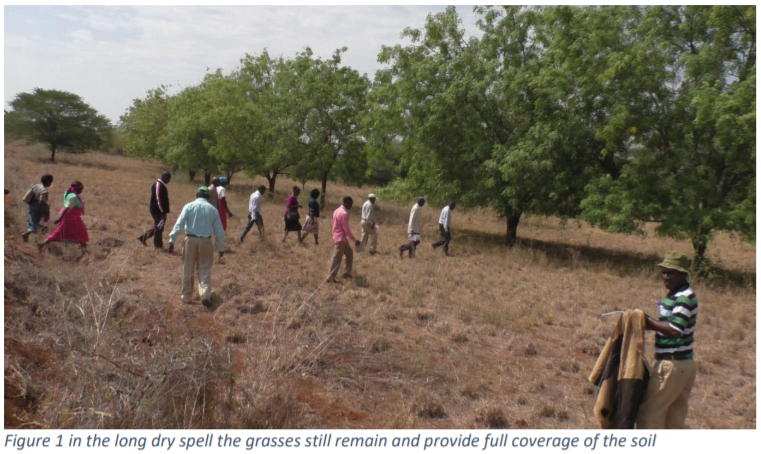 Jeremiah started planting different grass species on four acres of land. Then as the man-made pasture did well, he multiplied seeds and increased the acreage. What Jeremiah Ngaya does to get enough moisture for his venture, is to do pasture development with water harvesting by directing runoff from a dirt road passing next to his farm. Guiding the water through a diversion into trenches on the farm.
He almost had zero initial investment because he got free seeds from Kenya Agricultural and Livestock Research Organisation (KALRO) to start with, used his cattle to cultivate and family labour to plant and harvest.

In this season – one of the worst seasons in terms of production, where almost all farmers cannot harvest any crop due to the failed rains – Jeremiah is smiling all the way to the bank. He sold hay to his neighbours and farmers from far, who came looking for pasture for their animals. The grasses, amazingly, were harvested and sold, whereas every other conventional crop failed.

All this has provided Jeremiah with great resilience: ensuring feed for his animals, selling excess seeds and hay and securing his land functionality. The planted grasses moreover protect the soil once they are established. They fully cover the soil, thereby holding the soil together and retaining water.

Jeremiah is busy teaching other farmers how to venture into pasture farming: let us do the same! Let us ensure each farmer in ASAL can create real resilient livelihood systems around livestock and pasture management. He has also formed Kabatini Pasture and Livestock Improvement Group with a membership of 200 people.

When you look at the business case there is even more reason to start pasture farming. For seeds only, Jeremiah has harvested 500 kg of each Cenchrus Ciliaris, Chloris roxburghiana and Eragrostis superba, he sells for 900, 800 and 800 KSH respectively. Amounting to a total of 1,250,000 KSH. Making him an instant millionaire.

Here is the same story but in numbers. The table below compares the inputs and outputs for regular food crops and grass grown on 1 acre. The prices are given in Kenyan Shilling, with 1KSH = 1USD. The balance clearly tips in favour of growing native fodder grasses. 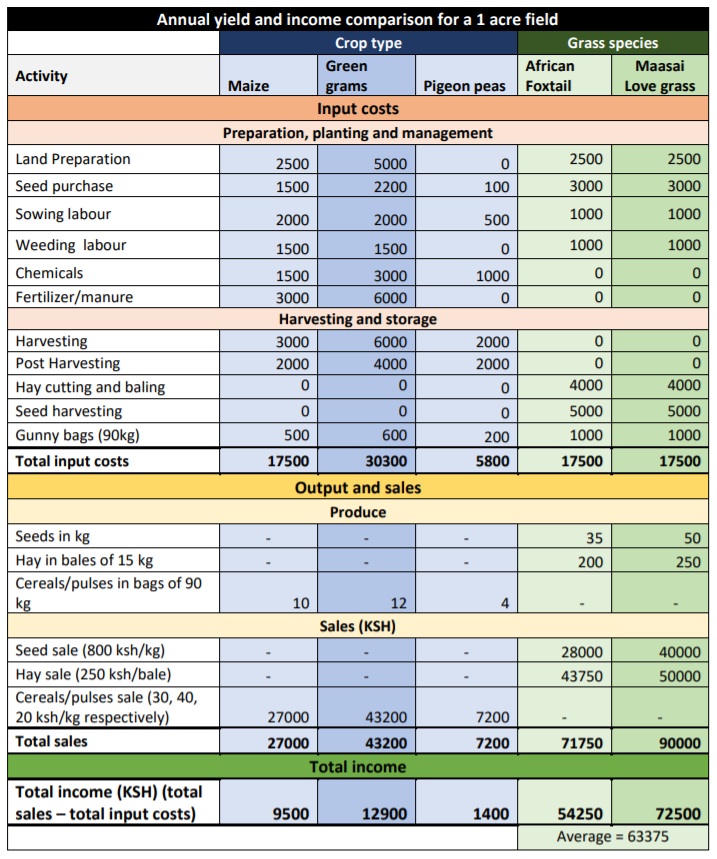 * the rates on input costs for grasses are here described as annual costs, however perennial grasses can remain for 5-20 years at same production levels. Therefore the total income on grasses will only increase with years to come.
** For green grams it is possible to get 2 harvests in one year, for maize and pigeon peas you would get 1 harvest per year.
*** Pigeon peas are nearly always intercropped with another main crop, mostly maize, therefore the costs for land preparation coincide with the preparation costs of maize.